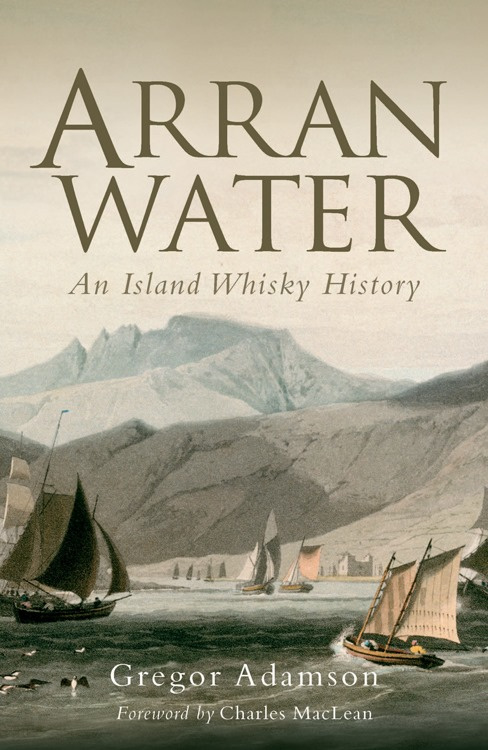 Arran Water’, the term for whisky distilled illicitly on the Isle of Arran, was revered for its quality throughout Scotland during the heydays of smuggling in the late 18th and early 19th centuries. Despite this reputation, Arran’s rich distilling past has long been forgotten, cast into the shadows of more illustrious whisky-making neighbours such as Campbeltown and Islay.

This pioneering book is the first to chart this fascinating aspect of the island’s history. In Arran Water Gregor Adamson provides a comprehensive first-hand account of distilling on the island from the emergence of clandestine manufacture in the late 18th century to the construction of the new distillery at Lagg in 2018 by Isle of Arran Distillers which reinstated legal whisky production on the island after 160 years with the establishment of a distillery at Lochranza in 1995.

Arran Water dispels the myths, hearsay and folktales that have distorted Arran’s distilling story and provides a clear narrative, largely through primary research, which highlights the key role that illicit whisky production and smuggling played in the island’s economic, social and cultural development.

Using a vast array of original sources, Adamson outlines the manufacture, transportation, and consumption of sma’ still whisky, unearths the secrets of the hidden bothies of the Arran hills and glens, and describes the bloody battles fought between island smugglers and the Excise gaugers and Revenue Cuttermen. The author also explores the development of licensed whisky production on the island, from the lost legal distilleries of the 1790s and 1820s to the modern developments at Lochranza and Lagg.

Key Features
Ground-breaking history of distilling on the island of Arran with previously unpublished records of the evolution of the craft. Illustrated with 16 pages of colour plates.

ARRAN IS – OR CERTAINLY WAS – commonly described as ‘Scotland in miniature’ on account of its topography, which combines both Highland and Lowland scenery. This splendid book reveals that the island was also a microcosm of what was happening elsewhere in the Highlands in relation to illicit distilling and smuggling during the late 18th and early 19th centuries – a fact which has hitherto been overlooked by historians.

Gregor Adamson has done a magnificent job. His research is thorough, even exhaustive, his approach scholarly, his writing lucid and engaging. I learned a lot about a subject which I myself have researched and written about extensively – indeed, this is the best account of smuggling I have encountered.

It is surprising that the subject has been ignored, for the illicit whisky from Arran was considered by connoisseurs to be second only to the same cratur from the Glenlivet district of what is now called Speyside. ‘Private’ distilling was only banned in 1781; prior to this individuals or communities were entitled to produce whisky for their own consumption, so long as it was made from grains grown locally and was not offered for sale. Of course, these conditions were often ignored and there was an extensive trade in smuggled whisky (the term embraced both illicit distilling and the transportation of illicit goods), and when smugglers were caught and brought to trial, magistrates were usually lenient. After all, judges were often landowners and if their tenants made and sold whisky they were better able to pay their rents.

By the turn of the 18th century smuggling was endemic. The hard-pressed Excise was incapable of subduing it and the increasingly onerous excise duties, imposed by government to pay for the war with France, simply encouraged distillers to operate outside the law. As Mr Adamson writes: ‘By the early 1800s whisky became the chief commodity transported by Arran smugglers as illicit distillation grew to unprecedented levels.’ But by then landowners were becoming increasingly concerned that if this aspect of the law could be flouted with impunity then further civil disobedience would ensue. Their fear of anarchy was realised during the turbulent years which followed the conclusion of the Napoleonic Wars and they pressed the government to address the problem by encouraging illicit distillers to go legal. Ultimately this resulted in the Excise Act of 1823 which laid the foundations of the modern Scotch whisky industry.

As I have said, all this was reflected in microcosm on Arran except the last, the encouragement to open a legal distillery. This did not come about to any meaningful degree until the opening of the Arran Distillery at Lochranza in 1995, which will be followed in early 2019 by the opening of Lagg Distillery in the south of the island by the same company, not far from the original site of a licensed distillery of the same name which operated briefly in the 1820s and 30s.

I commend this book to you wholeheartedly. It is a fascinating and accurate case study of what has become ‘Scotland’s greatest international ambassador’ – and the world’s greatest drink!